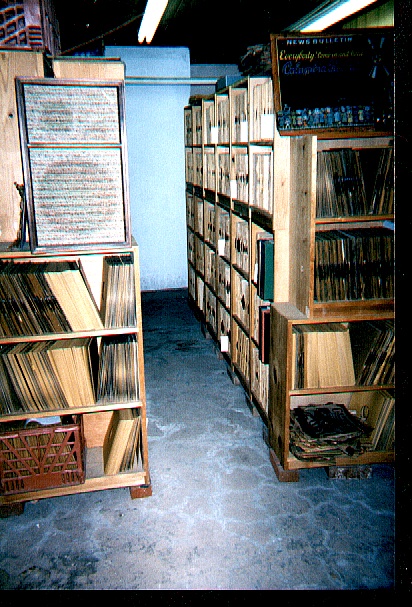 The Archive consists of about 125,000 items of printed music, 75,000 items of recorded music, 5,500 books and 2,000 periodicals on New World vernacular music, dance, and related topics. The occupied shelf space is about 1390 linear feet.

Printed and recorded music is filed by year of publication to the extent practicable. There are no duplicates, but numerous variant issues are retained. Card files provide cross-reference by title with over 200,000 items, including citations in books.

The Archive tracks developments in new world vernacular music and dance over a span of 130 years, displaying changes in form, tonality, rhythm, variation, and performance practice, including changes occurring outside the dominant commercial centers.

The archive is particularly strong on African-American composed and performed music and dance from the early 1800s through the 1900s and its commercially marketable corollaries – minstrel, spiritual, gospel, cakewalk, ragtime, blues, jazz, bop, etc.

Regional, cowboy, old-time country, ethnic, and Hawaiian music and dance are covered, and there are many Canadian, Caribbean, Mexican and Latin American items as well. Writers and performers for the musical stage and screen are well represented, ranging from genteel to rough-house. Vocal music includes songs and choral arrangements, both secular
and sacred.

Instrumental Music includes solos and combinations for string, fretted, wind, or percussion instruments, as well as for piano. There is an emphasis on methods of variation and on “transforming” material into differing rhythm or tonality. Orchestrations range from small to large: Brass, Military, and Concert Bands; Salon Theatre and Concert Orchestras; Dance and Jazz Bands/Combos; and Mandolin groups.

The Archive is organized and catalogued to promote retrieval and study of related items and classes of material as they developed over the 130 years. A user can identify and retrieve variant issues and differing versions of dance, song or instrumental piece, both printed (including solos and orchestrations) and recorded (including alternate takes and remakes), and can compare them to others of the same period, origin or genre. Changes in its performance practice are also detailed in dance manuals and instrument methods.

The user can see how established ways of dancing and making music have been supplanted by imported fashions, and how the old ways continue in use in backwater areas; developing on their own, and then re-emerge – to be perceived in the dominant centers – as novel, quaint, or even socially threatening.

Consists of 16,500 78-RPM discs (virtually all original issues), 3,900 LPs, and 225 open-reel tapes. Discs are filed by manufacturer’s catalog number, and LPs by category in time periods. About one-half of the discs are acoustical recordings from 1898 to 1925. About 600 are vertical-cut Edison or Pathe system. LP’s are re-issues of old recordings, or new recordings, some of dance music from as from as early as the 1650s. About one-half of the LP’s are re-issues.

There are separate index card files – by title – for printed and recorded music, and numerous catalogs, discographies, and other retrospective cross-references to allow retrieval by show, writer, artist, or genre. There is another card file for books having citations. Books on music and dance, and on related topics, are largely original editions from the 1800s to the present, filed by category.

There are over 2,500 books on History, Commentary, Analysis, Reference and Biography, filed by type of Music or Dance; Music Publishing and Copyright; Sound Recording and Broadcasting; Acoustics and Harmony; Orchestration, Composition, and Performance Practice; and on Musical Instruments.

Another 3,000 books are on topics such as Vernacular Speech, Art and Architecture: Oral Traditions and Cultural Diffusion; Commerce, Distribution and “Boom” Industry; Urban, Rural and Frontier Life; Deviant and Underworld Sub-cultures; Evangelism and Churches; Certain Cities, Regions and Countries, including City Directories and Atlases; Africans in the New World and Immigration; and General Histories of Settlement and Expansion in the New World.